All at sea with IoT 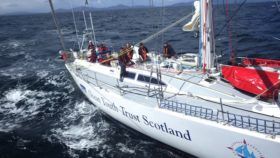 Stuart Simpson, a senior engineer at CENSIS took his work starboard this summer, while helping a group of young scouts find their sea legs with the Ocean Youth Trust Scotland.  Stuart was skippering the Alba Explorer with a crew of 12 youngsters aged 13-18, from The Scout Association, and four other deckhands. Setting off from the high tides of Oban, the crew set a six day course for the Outer Hebrides to find its bounty. The sail training vessel, armed with a sensor node specially designed by Stuart, together with a purpose-built website,took to the sea to help the young’uns develop their nautical skills. 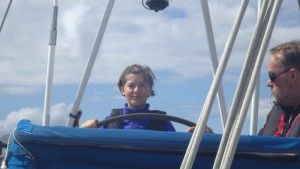 The cabin boys and girls learned how to navigate the vessel, manage the boat and ensure the voyage was ship-shape during their tour of the West of Scotland.

Using the sensor, built by the CENSIS crew in just a week, and making use of Internet of Things (IoT) technology, anyone on land could keep track of the ship’s roll and pitch angle, UV light index, coordinates, temperature and air pressure.

To capture all of this data, a mobile phone was used to provide backhaul to an IBM bluemix and Wi-Fi access point to a CC3200 TI Launchpad. This provided a microprocessor for the systems and connections to the sensors. 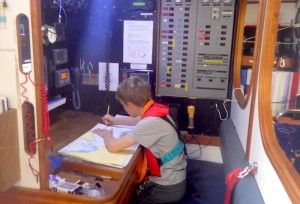 Skipper Simpson said: “In a small way, the technology we’ve used on the ship helps prove the wider IoT concept; through the use of sensors to detect and pick up data, communicating this wirelessly and transmitting it to a cloud-based system. Doing this on a ship with these Scouts is a great way of showing young people a practical application of technology which is set to become ubiquitous as they grow up and enter the workforce. “I’ve been volunteering with the Ocean Youth Trust Scotland for 28 years, starting at the bottom as a swabbie, rising to be the ship’s captain about 11 years ago – it takes time and effort to get to know the ropes. It’s a pleasure and privilege to help these young sprats learn some valuable skills which are applicable in many walks of life; not just on the ocean’s wave. They learn how to do everything from navigating and sailing the ship to baking bread and preparing food. 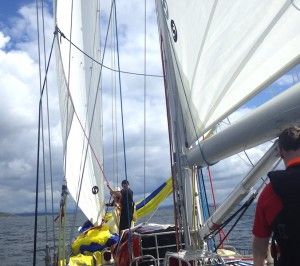 “It was a great experience for everyone involved, even if we had to batten down the hatches because of the weather. But, with our purpose-built sensor and website, there was no chance of us going adrift.”

UPDATE:  Even the Scotsman heard about Stuart’s adventures and reported in their business diary.

The importance of environmental testing for sensor products and technologies