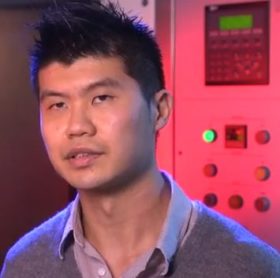 Watching emotions unfold during the Rio Olympics and hearing the stories behind the athletes from the commentators has brought tears to my eyes. I admire the athletes’ dedication to their sport along with the four years of preparation, the losing by a fraction of a second or an unpredicted muscle cramp. Competitions at this level are won by the smallest margins of every possible gain with the careers of the athletes and their coaches depending on it.

Science is an indispensable part of all sports. It can help predict muscle cramps based on the abnormal patterns of your gait, which would go unnoticeable by the human eye. Besides injuries, player performance can also be statistically improved by being able to see the workload of the athlete in real time as well as historical baseline comparisons.

Internet connected electronics and sensors are becoming so miniaturised that they can now be worn on the body to measure metrics in the most seamless way. Wearable technology is really coming of age; going beyond connected bracelets that track location, speeds, accelerations and heart rate and moving into more garment-integrated products that can analyse punches, jumps and other 3D movements.

From sensing touch, to collision and impact

In fencing a wireless scoring system is worn on the body, which records when a fencer makes a valid hit on an opponent. This wearable is different because movement is only half of the story for a lot of sports. The sense of ‘touch’ in the case of fencing is a missing metric in a lot of other sports. In fact, we are talking about much more than ‘touch’; we are talking about the sensation of force such as collisions and impacts on the body. 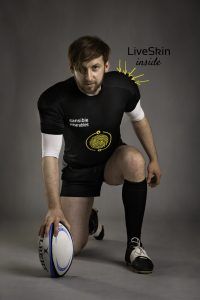 This coincides with my fascination of rugby and the return of the sport to the Olympic Games for the first time since 1924. Rugby is a hard heavy contact sport with brutal tackles. At the time of writing of this blog, Team GB women is about to play the All Blacks in the semi-final. There is also a lot more running in rugby sevens compared to the traditional 15-person squad, which means there is a lot more room in the field to run for accelerating into a collision with bigger impact forces.

How would measuring the true magnitude of impact forces on the body help athletes? If an athlete produces a certain number of impacts with a known amount of forces, we could learn their workload and energy demand, which in turn helps predict player fatigue. Also by knowing the imbalance of force exerted by the left and the right side of the body, it can provide guidance for improving tackling and scrummaging techniques.

Currently there are no wireless devices that can accurately measure the experience of force directly compressed onto the muscles at the collision site of the body. This is the prime motivation for us to create LiveSkin, a wearable product that measures and tracks force loads in real time. There are a lot of challenges in making the product cover the body areas where impacts are made, while also being comfortable to wear and record accurate measurements. I believe this is why we are at the frontier in body force experience.

With virtual reality already being deployed in Rio, I predict that we will soon see body force information generated from the LiveSkin being overlaid in augmented reality (AR) as part of the future broadcasting of sport.

Serving up digital engagement at Wimbledon