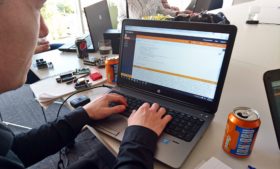 Mohsen Shakoor of Stream Technologies discusses a mini hackathon held with CENSIS and Scriptr that investigated how LoRa® can be used to develop solutions for smart city challenges.

Last month, Scriptr.io’s CTO, Karim Saikali, flew in from Lebanon to visit the Stream Technologies team in Glasgow. We thought it would be fun to organise a mini LoRa® IoT hackathon to discover what applications the team could produce using data gathered from Stream’s LoRaWAN™ network in Glasgow.

The result: Several prototype LoRa® based smart city applications developed from scratch in the space of a few hours.

After the last slice of pizza had been devoured, the team spent the afternoon brainstorming and building IoT applications from scratch using the scriptr.io platform and devices from CENSIS. The diet may not have been healthy, but the competition was, with the team racing to the finish line to see who could produce the best solution first.

The result was a dynamic map which displays the location of the sensor and car park availability in real time. In the future this could be developed into an application to route drivers to the nearest available parking location, resulting in reduced traffic congestion and CO2 emissions and saving fuel, time and money.

Tom and Caitlin – Web Developer and System Developer at Stream – then came up with a waste management solution using LoRa® fill-level sensors, with a view to helping local authorities save time, costs and reduce their carbon footprint. A dashboard displayed the bin’s fill-level and the predicted date and time at which the bin would be full.

Tom and Caitlin envision that this solution could be expanded to track both bin and waste collection truck locations, in order to create collection routes that prioritise bins that are either full or close to being full. This would significantly reduce the amount of fuel used by trucks and potentially reduce the number of trucks on the road.

Another Stream member developed a smart office application that allows us to remotely monitor the occupancy of meeting rooms as well as the room’s temperature and light levels using devices provided by CENSIS. The data is recorded by low-power LoRa® sensors and transmitted to LoRa® gateways several kilometres from the office. The gateways then transmit the data back to the application and it is displayed live on screens in the office. This lets us check whether or not meeting rooms are occupied, without having to knock on the door.

The response to the event was fantastic, with the team planning to use their applications as the basis for LoRa® based smart-city solutions that will be developed over the coming weeks.

Smart seats on the smart sampus

Designing and building an IoT device from scratch