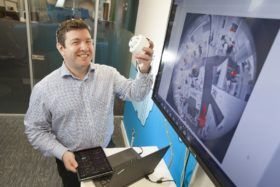 The NHS’s 500-million sq. ft. estate could be on the verge of an IoT revolution, following the development of a new sensing technology by a Scottish property technology start-up.

Beringar, one of seven IoT Explorer companies supported by CENSIS, has developed – with CENSIS’s team of engineers – a non-intrusive sensor which will significantly improve the health service’s understanding of how its buildings and moveable assets, such as hospital beds, are used.

Read the article in the Herald.

6 October 2017
View ALL News
Next Article