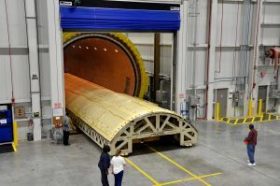 Manufacturing a range of components, from wind turbine blades to car panels, could become significantly more cost-effective and quicker thanks to a ground-breaking R&D project between Spirit AeroSystems, CENSIS and the University of Strathclyde.

The project has found a new, more cost-effective method of producing composite parts, replacing the traditional autoclave “curing” process with an intelligent and tailored heating tool. The process could dramatically cut operating expenses and reduce cycle times by 40%.

In an industrial context, autoclaves (see the image) are vessels used to process materials in a mould at high pressures and temperatures. They typically ‘cure’ high-performance components, placing the part in a vacuum within an autoclave and then applying a combination of pressure and heat during a pre-determined cycle – typically two hours at the cure temperature. The result is a high-strength, lightweight component for use in a range of high-value manufacturing sectors, predominantly aerospace.

Normally, these parts are cured for a standard period of time, at a set temperature, regardless of how they are responding to the curing process. The consortium in Prestwick has improved on this by creating a tool that removes the need for an autoclave, which typically represents around US$4 million in upfront capital expenditure, while allowing users to monitor and match a cure cycle to a component’s geometric characteristics and how it is reacting to the process.

Not only has the initiative created a unique curing process, it has also developed an entirely new capability in the UK for a number of supply chains. Depending on a component’s geometry, the project could reduce operating costs by as much as 50%, through reduced CAPEX, factory space and energy consumption, while cutting cycle times by up to 40%.

Read more about the project.

Property on the cusp of a tech revolution

1 December 2017
View ALL News
Next Article