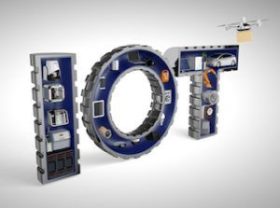 Businesses in Scotland are set to benefit from the most advanced IoT network in the UK as part of a £6 million project, launched by Scottish Government Minister for Public Finance and Digital Economy Kate Forbes MSP.

The project, called IoT Scotland, will see the rollout of a LoRa Network across the country, allowing business to benefit from state-of-the-art connectivity.

The vision of national IoT network is one that has long been championed by CENSIS: we launched Scotland’s first LoRa network in Glasgow back in 2016, and are supporting a number of projects that already use LoRa connectivity.

IoT Scotland makes it possible to realise IoT connectivity in a way that is both achievable and affordable. A host of small, low-power, battery-operated devices will be able to send and receive data efficiently and reliably, using the new network to talk to the internet without the need for 4G or WiFi.

Scottish Government on Twitter:
“Digital Economy Minister @KateForbesMSP has announced that the @scotgov is investing £2.7million to roll out the £6million ‘Internet of Things Scotland Network’.”

📢 📽️ Digital Economy Minister @KateForbesMSP has announced that the @scotgov is investing £2.7million to roll out the £6million 'Internet of Things Scotland Network'. The IoT Network will make Scotland a natural test bed for innovation in connectivity 👇https://t.co/6OnTdipbDS pic.twitter.com/lb9fe1K5To

As the network is rolled out across the country it will give companies of all sizes the opportunity to innovate, providing low-cost access to next-generation connectivity and helping organisations grow through the development of new solutions and devices with global export potential. Project partners include Scottish Government, Scottish Enterprise, Highlands and Islands Enterprise, and Boston Networks.

Ian Reid, CENSIS CEO commented: “We are proud to have played a key role in the genesis of this project, having spotted the potential of a national IoT network several years ago.

IoT will transform the business models of many industries of importance to the Scottish economy, either creating internal efficiencies or introducing new revenue streams. Businesses will be able to see in real time how products or services are performing or being used.

We look forward to working with companies to help them explore the possibilities and potential of this new network.”

Kate Forbes MSP said, “We made a commitment in the 2017/18 Programme for Government to invest in a new wireless sensor network. This network supports full commercial use of IoT in Scotland and will help transform the potential for businesses to pilot their ideas and then launch proven, sustainable products and services into the global market.”