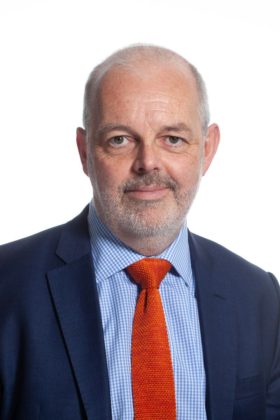 In a career spanning more than three decades, Paul has held senior positions across hi-tech organisations in the US and UK, covering sectors ranging from defence and security to medical and transport. He began his career with the Ministry of Defence eventually becoming chief executive and president of QinetiQ’s North American operation in 2007.

CENSIS has appointed Paul Winstanley as its new chief executive. Paul takes up his new role on 7 January 2019.

Since 2010, he has held a series of board and non-executive appointments at organisations such as the UK Defence Solutions Centre, Reliance High Technology, and BHR Group. In 2012 Winstanley co-founded big data consultancy Alazen, where he was chief executive. He has substantial international experience, along with skills in capital raising and realising value from technology.

Current CEO Ian Reid will be standing down at the end of January 2019 after five years of leading the Innovation Centre, after leading CENSIS into its second five-year funding phase, with £9.25M secured from the Scottish Funding Council, Scottish Enterprise and Highlands and Islands Enterprise.

Paul Winstanley said: “This is an exciting time to join CENSIS as the team embarks on its second phase with a reinvigorated focus and energy. The Innovation Centre’s strength undoubtedly rests in the broad spectrum of sectors it touches, many of which play a crucial role in Scotland’s economy and have huge potential – digital enablement and the growth of the Internet of Things, subsea and marine activities, manufacturing, and healthcare to name but a few. Ian has done an excellent job of making CENSIS the go-to innovation partner for businesses of all sizes in Scotland and I look forward to building on that solid foundation.”

Ian Reid added:“The last five years have been about establishing CENSIS as a trusted partner which can bridge the gap between industry and academia – a fact reflected in the 150-plus projects we have brokered in that time. It’s been a memorable period in my career and I’m very grateful to the many businesses, researchers and public sector partners we have worked with over the years. With his breadth of experience, Paul is the ideal person to take CENSIS forward in phase two and I wish him and all of the team the very best for the future.”

6 December 2018
View ALL News
Next Article