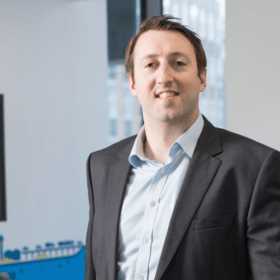 CENSIS Business Development Manager, Stephen Milne, outlines the trends we can expect to see more (or less) of in 2019

A reverse microwave, the first Amazon Go shop, and Kuri the home assistant – what do these all have in common?

They were among the most exciting new technological developments of 2018.

While the world’s first quantum computer may already have stolen the show in 2019, there is still a broad range of other exciting tech to emerge over the next 12 months – each could make a big difference to businesses, whether they are technology-focussed or not.

Here are five of the top tech trends we’re likely to see over the next 12 months – as well as one we’ll talk about, but won’t do much with – and how they will affect businesses:

1The year of IoT

There’s been a lot of talk about Low Power Wide Area Networks (LPWAN), a wireless communications network that is the ideal enabler for Internet of Things (IoT) devices – in fact, CENSIS installed Scotland’s first LoRA LPWAN network three years ago. However, 2019 will be the year the technology starts to mature. Commercial networks for LoRaWAN will start to provide coverage and we should see the first Narrowband-IoT networks delivered by cellular operators. These rollouts will mean that companies can really start to look at developing and trialling applications and new services, through to scaling nationally and beyond.

This year we’ll start seeing smarter buildings and places. While early iterations of the technology involved being reactive to changes in a building – for example, noticing more people were in a room and then turning on the air conditioning – the next phase will involve tracking and predicting how spaces are used to optimise comfort and embrace ‘wellness’. This could take the form of monitoring usage patterns to deduce that a room will be busy at a certain time and then adjusting the heating accordingly, before people even arrive.

3 Moving intelligence to the edge

The growing use of edge computing – which moves data and computing power away from central points in a network – will enable more decisions to be made at a device level, which can reduce latency, avoid costs, and lessen the security risks of streaming data back to a server. This trend will enable machine learning and AI applications to move into low-cost hardware, which opens up a huge number of exciting new IoT use cases for businesses to exploit. We’re already seeing examples of this emerge in Scotland with the likes of Beringar, which has developed a device that can accurately count the number of people in a space at any time.

Awareness of cyber security will continue to increase, as it has done over the last few years. At CENSIS, we focus much of our cyber-security efforts on ensuring security is designed in to a device, rather than considered an afterthought and tacked on at the end. This is important not just for technology developers, but also for companies considering implementing IoT solutions. For the first time, the UK Government’s flagship cyber security conference, Cyber UK, with more than 2,000 delegates in strategy and leadership, will come to Scotland in April, underlining its growing importance.

5 Individuals using their data as an asset

As vision and imaging technologies develop, individuals will become more aware of the value of their data and start to use it as an asset. Systems are being developed and tested that allow individuals to control their health, financial, social, wearables and entertainment data effectively. It is then their choice whether they want to share that data with a third party. While further regulations are likely to follow in this area, companies still need to think carefully about how they deal with privacy and data to build trust with their users.

The next 12 months will bring more talk about 5G, but we don’t believe anything mainstream is set to happen in the UK. The first handsets might emerge, but 5G is going to be more than just faster browsing on a mobile device – it will increase the overall capacity of the network, lead to better resilience and evolve to support IoT standards in future iterations. While the first networks may emerge this year, 5G is still in the early stages of exploration and it may be years until we see its full potential.

This article also appeared in Insider on 23 January 2019.