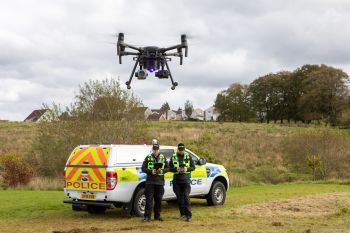 The technology, believed to be the first of its kind used by police forces in the UK, is a form of machine learning that provides real-time image analysis for identifying humans in rural areas. It has been developed by a consortium of partners – CENSIS, Thales UK, University of the West of Scotland and Police Scotland.

With core AI development work complete and trials of the new system already underway, the project team expects the technology to be deployed in searches for missing and vulnerable people in Scotland in the near future.

Computers with very large amounts of data processing power were previously required to run similar technology, rendering it immobile. However, the specifically designed algorithms developed in this project can be used on a smartphone or tablet connected to an RPAS.

Trained with hundreds of hours of footage of police officers in different clothing, positions, and situations – and with all footage taken on police premises – the AI scours an image and can locate a person within seconds at a distance of up to 150 metres.

The RPAS is operated by a specially trained officer on the ground, while another officer receives a real-time video feed from the RPAS cameras on a smartphone. The incorporation of the AI technology will help Police Scotland cover large areas of ground in the search for a missing person, reducing the need for lengthy and meticulous checks from teams of officers on the ground.

Initially being employed in the search for missing and vulnerable people, the technology could potentially be used in a variety of other applications, including monitoring wildlife on land and at sea.

The technology will be showcased for the first time at the CENSIS 6th Technology Summit, 7 November, Glasgow Royal Concert Hall.

2 October 2019
View ALL News
Next Article