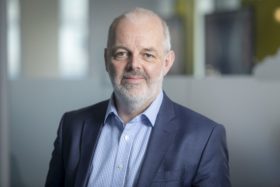 Earlier in the summer, CENSIS CEO Paul Winstanley sat down with Brian Donnelly, Business Correspondent of the Herald, to talk about his first year in post. This wide ranging interview, published on 31 August 2020, looked at everything from CENSIS’s response to COVID-19 and the potential to use sensor systems to support safer returns to work, to our cyber security accelerator programme, and our plans for our joint virtual conference on climate change in November.

You can read the full interview below, or online at the Herald website.

Operating at the cutting edge of innovation, the team led by Paul Winstanley was in a prime position to guide both government and commerce through critical moments of coronavirus as the pandemic unfolded.

CENSIS, the Innovation Centre for Sensing, Imaging and Internet of Things (IoT) technologies, is one of seven Scottish Government-backed centres tasked with helping private businesses and public sector organisations accelerate the pace of innovation, and it found itself in demand as the country moved into lockdown and normal practises were replaced by new ways of working.

An advanced innovation centre like CENSIS would be considered well-equipped to pivot in such circumstances and its collaborative way of working came into its own.

The centre is now looking at developing safe methods of bringing more staff back to the wider workplace and also how to make travel a possibility again with the use of sensors.

Mr Winstanley said: “For us, it’s actually been a real eye-opener into what you can actually do to work and operate effectively whilst remote.

“But the thing that I’ve seen, which is probably most different during the pandemic, is actually the level of collaboration has increased quite significantly for us.”

The organisation was able to help both commerce and the Scottish administration during the early search for personal protective equipment as the pandemic took hold.

“A lot of it was actually just simple signposting but in both directions.

“Government are looking for certain things but also companies who feel that they’ve got something to offer.”

Mr Winstanley said new challenges join existing ones as the world moves towards new ways of working across most sectors.

The organisation has carried out an examination of one company to help set out safe practices around numbers of people using facilities, and one solution was an occupancy sensor that identifies the whereabouts of staff to allow more free movement through buildings.

It is looking at the wider potential use of sensors around workplaces as well as in public transport to help maintain levels of occupancy.

“We’ve done some work across government and enterprise agencies where we’ve pulled together some good practice guides, which we’re publishing shortly on our website, just to inform people about what’s out there, what’s feasible, what’s not.

“We’ve also run some early stage work, unfortunately I can’t say for whom, where we equipped the facility for them, and it was part of their own due diligence in return to work for insurance that they were working safely.”

With that business, he said, “there’s a number of things around that that we’ve done, one was an occupancy sensor which informed their workers when particular assets were being used so they could schedule them out.

“We’re seeing quite a lot of interest from the transportation sector saying can we apply the same type of techniques to public transport.”

CENSIS, which is based in George Street in Glasgow, pointed to “four of the most exciting emerging tech companies in Scotland” it is providing packages of support for in order to create new IoT focussed cyber security products and services.

Beringar is developing real-time monitoring of workplace use patterns, PolyDigi Tech will create software that provides reassurance of data ownership and control of IoT devices, Lupovis, is creating anti-hacker tech and Craft Prospect is looking to create a way of enabling secure communications channels to be set up.

Among the existing challenges that never went away is tackling climate change, he says: “As we move on we’re working with colleagues across the enterprise agencies in particular, but also with all of the innovation centres, on a virtual climate change conference, which we’re looking to run in November.

“We’re looking to set out what we can contribute to Scotland’s net zero objectives, particularly through innovation. But also the timeliness of this is significant. It will be a year to the revised COP26 visiting Glasgow.”

What countries have you most enjoyed travelling to, for business or leisure, and why?

When you were a child, what was your ideal job? Why did it appeal?

What was your biggest break in business?

What was your worst moment in business?

Who do you most admire and why?

What book are you reading, what was the last film you saw and what music are you listening to?