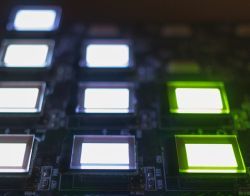 A University of St Andrews spin-out has received a significant funding package to make the key materials for a range of everyday technologies – such as TV screens and mobile phones – much more sustainable and cost-effective, by removing their need for some of the planet’s rarest metals.

SolOLED, formed last year, has secured £200,000 in new funding from Scottish Enterprise and has initiated a collaborative research project with CENSIS to commercialise its novel materials as components in solution-processed organic light-emitting diodes (OLEDs).

The company has developed a family of novel ‘organic thermally activated delayed fluorescence’ (TADF) dendrimers that are sustainable and more cost-effective to synthesise and show comparable performance in solution-processed OLEDs to commercial metal-based emitters. Solution processing encompasses a range of manufacturing methods where a number of the layers contained within the OLED, including the emissive layer are deposited from solution. SolOLED will commercialise these sustainable materials with support from CENSIS. This is the first project to be delivered between CENSIS and the University of St Andrews.

Like traditional LEDs, OLEDs produce light when an electric current passes through them, the colour of which is linked to the nature of the emitter material used. Current solution-processed green and red OLEDs employ emitters that contain the scarce, environmentally impactful, and costly noble metal iridium.

OLEDs are rapidly replacing traditional LED and liquid-crystal display (LCD) technologies and are used in a variety of technologies that are becoming increasingly ubiquitous in modern life – including smartwatches, mobile phones, and TVs. They will also be key components of more flexible, large area, and interactive technologies, such as VR headsets and transparent touch screens, in the future.

The reason for the popularity of OLEDs over LED and liquid-crystal display (LCD) display technologies is that they offer outstanding colour quality, high contrast ratios and resolution, can display pure black and can be fabricated on a wide range of substrates, while consuming less power.

The global market for OLEDs is expected to expand significantly over the next few years, with the OLED panel market alone predicted to grow by 12.9% annually from 2021 to 2026. Solution-processed OLEDs currently represent a small but rapidly growing segment of overall OLED sales and the market for the materials that are used in solution-processed OLEDs is projected to have a year-on-year growth of around 145%.

Read the press release for this project.