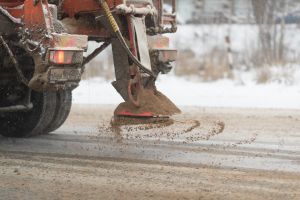 With support from CENSIS, East Renfrewshire Council has become one of the first local authorities in Scotland to use IoT to deploy a ‘smart gritting’ system, supporting the existing weather data used when deploying gritters and further improving safety for road users.

In autumn 2020, robust, low-cost sensors were installed on roads on the outskirts of Barrhead – an area prone to low surface temperatures – to measure the temperature of the road. That data can then be viewed by the Council using an IoT network, and used along with weather data already in place to target resources in areas most in need. Already, the sensors have been used over and above our specialist weather forecast information to better inform and change gritting priorities in real-time to improve public safety.

Data will be added to a mapping programme that will identify the roads most impacted by ice and frost. It will also inform a predictive model that will improve road safety and minimise travel disruption.

This project is a smart towns and cities IoT project, part of the wider FutureTech series of IoT projects supported by the Scottish Government. In 2019-20, CENSIS delivered a year-long Scottish Government-funded programme to demonstrate the transformative potential of IoT across some of Scotland’s key growth industries. The programme of activity included a series of ‘FutureTech’ workshops to identify projects for ongoing support as well as the development of IoT2Go, a starter kit aimed at businesses without any in-house IoT expertise. Combined with a suite of ‘how-to’ guides from CENSIS, these initiatives will aim to educate and inform businesses and organisations about how they can use IoT technology.  Each stage of the programme was designed to maximise the potential for IoT technologies and promote their benefits to both the private and public sector in Scotland.