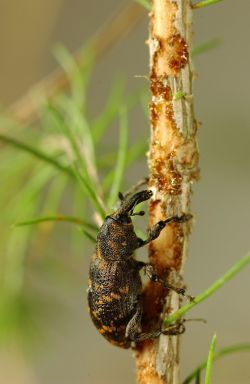 Read the news release about this project.

CENSIS is leading the development of an IoT enabled remote imaging and monitoring system to tackle the perennial risk posed to forestry from pine weevils, one of the biggest biological challenges to the sector.

The system – created by a consortium comprising CENSIS, pest management company Sentomol, Forest Research and the Natural Resources Institute at the University of Greenwich – will allow land managers to identify and quantify the presence of the insects in commercial forests across the country.

The large pine weevil (Hylobius abietis) can cause significant damage to newly planted, immature forests.  The adult beetle feeds on the bark of living trees and other woody plants, with a preference for the bark of young trees. Its feeding damage can kill a young tree if it girdles the stem, and a large population of weevils can kill thousands of young trees on a newly restocked site.  In worst-case scenarios it can destroy all of them, even in some cases where attempts have been made to protect them using insecticides.

Left unmanaged on a site, pine weevils have been shown to destroy an average of 50% and up to 100% of young conifer trees, with conservative estimates suggesting they cost the UK’s forestry sector at least £5 million per annum. The insects are found in all parts of Scotland and other key UK forest areas, along with most of northern Europe, and have been detected as far afield as Turkey, China, and even Japan.

Currently, the management of pine weevils is controlled via manual checks by foresters: these are time-intensive and can be open to interpretation. In a new approach, weevil attractants are placed in unique traps, known as Hylopods, spread across clearfell forest sites to attract and catch the insects. A camera system – using machine vision and artificial intelligence techniques developed in the CENSIS Vision Lab – identifies and counts the insects and provides an alert through an IoT network. Foresters can then make better informed, more evidence-based decisions on how to manage their sites.

The monitoring system currently transmits data over a cellular network however this is set to be expanded to incorporate other communication networks suitable for use in remote areas including LoRaWAN and potentially satellite.