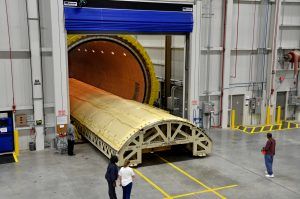 Manufacturing a range of components, from wind turbine blades to car panels, could become significantly more cost-effective and quicker thanks to a ground-breaking R&D project in Prestwick, Scotland.

The project – involving Spirit AeroSystems working with the University of Strathclyde, and supported by CENSIS – found a new, more cost-effective method of producing composite parts, replacing the traditional autoclave ‘curing’ process with an intelligent and tailored heating tool.

In an industrial context, autoclaves are vessels used to process materials in a mould at high pressures and temperatures. They typically ‘cure’ high-performance components, placing the part in a vacuum within an autoclave and then applying a combination of pressure and heat during a pre-determined cycle – typically two hours at the cure temperature. The result is a high-strength, lightweight component for use in a range of high-value manufacturing sectors, predominantly aerospace.

Normally, these parts are cured for a standard period of time, at a set temperature, regardless of how they are responding to the curing process. The consortium in Prestwick improved on this by creating a tool that removes the need for an autoclave, which typically represents around US$4 million in upfront capital expenditure, while allowing users to monitor and match a cure cycle to a component’s geometric characteristics and how it is reacting to the process.

Not only did the initiative created a unique curing process, it developed an entirely new capability in the UK for a number of supply chains. Depending on a component’s geometry, the project could reduce operating costs by as much as 50 percent, through reduced CAPEX, factory space and energy consumption, while cutting cycle times by up to 40 percent.

Stevie Brown, Lead Engineer at Spirit’s Advanced Technology Centre in Prestwick, said “Instead of curing components at a standard temperature for hours at a time, we can now tailor the cycle time to match individual part geometries. The autoclave has been a bottleneck in manufacturing lines, and removing it will reduce cycle times for components, cut production costs and decrease energy consumption.”

Christos Tachtatzis, from the University of Strathclyde’s Department of Electronic and Electrical Engineering, commented: “This initiative is about bringing engineering solutions to industrial challenges: tracking of the progression of the curing process during the manufacture of high-value components is a big gap in manufacturers’ knowledge.”

“The consortium has developed a multi-zone heated tool with advanced control of the curing for individual parts, allowing for geometry-driven cure cycles and better decision making. The optimisation of the composite curing process has been a long-term goal for a range of industries and this solution has the potential to revolutionise the sector.”

“The knowledge exchange between both organisations has been key to the success of the development. The project will continue for another year at least, giving us the opportunity to mature the technology further towards the productisation phase. The new approach to curing has huge potential in any industries that rely on composite materials.”

CENSIS supported the collaboration with £50K of funding, as well as project management and monitoring expertise from its team.

Craig Fleming, Senior Business Development Manager at CENSIS, added: “This project has the ability to change the way a range of high-value components are manufactured – it’s a groundbreaking initiative. The collaboration between Spirit AeroSystems and the University of Strathclyde demonstrates what can be achieved when Scotland’s world-class academic institutions and industrial base work together.

“Not only is it a first for the UK, but the academic know-how provided by the University of Strathclyde is allowing Spirit’s Prestwick facility to lead the way globally; helping its operations in the US and beyond look at this new approach to component fabrication. It’s encouraging to see a Scottish manufacturing and assembly site set a new benchmark in global manufacturing capabilities.”