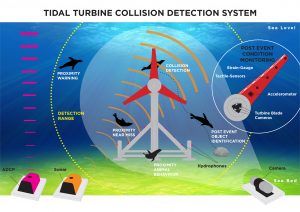 A new type of sensor could soon be installed on the blades of subsea tidal turbines to monitor the interaction between marine life and renewable energy installations, as a result of a new collaborative project involving the Offshore Renewable Energy (ORE) Catapult and CENSIS. The initiative is the first time the government-backed Catapults and Innovation Centres have worked together and the collaborative project explores how to cut costs and boost confidence in tidal energy projects.

The organisations’ research will aim to improve the monitoring of activity around subsea tidal installations and provide a warning when there is a risk of a collision with a tidal device. The project partners will assess whether sensor technology from other industries can be employed to detect, monitor and forewarn of potential collisions with tidal energy devices, or if a new sensor technology is needed.

Current monitoring processes can be very expensive, involving teams of watchers on the seashore and a mixture of subsea listening devices. Subsequently, the cost of subsea environmental monitoring can be substantial and inconclusive when it is difficult to confirm surface sightings with events beneath the waves.

Regulations stipulate that developers must analyse the environment around a proposed site for two years prior to installation, as well as during the construction phase and throughout the plant’s operation. This is likely to be at least 20-25 years.

Vicky Coy, Project Manager at ORE Catapukt, said: “Tidal energy is an emerging market with great export potential, which the UK has the potential to lead. We have some of the best tidal resources around the UK and are already at the forefront of industry research, leading in the design and demonstration of this technology. Scotland, in particular, has a number of rich tidal energy sites with the Pentland Firth and Orkney Waters among the greatest in the UK.

“Our primary concern is safety: the safety of both the natural environment in which we want to operate and of the equipment we want to install and use to generate energy. To achieve that, we must design reliable monitoring systems that confirm these systems can be comfortably integrated into the subsea environment. But, we also need to make the technology cost effective. Another aspect of this project is to simplify and reduce the costs from what is, in effect, the subsea equivalent of the planning process.

“Tidal energy developers tend to be small and medium-sized companies with limited resources, so any costs which can be removed at the same time as improving safety will be welcomed by the industry. We’ve had a lot of positive engagement from both the business and academic communities, and we’re looking to harness this support further when we move to the next stages of this initiative.”

There are a number of developments at various stages of the planning process in the tidal energy market. The first and most high profile of these is the MeyGen project located in the North of Scotland. It aims to deploy up to 398MW of offshore tidal stream turbines by the early 2020s.

Gavin Burrows, Project Manager at CENSIS, said: “We’re working with a number of organisations to articulate the needs for a sensor system with the appropriate sensitivities – one that can provide evidence of how marine mammals behave near tidal turbines and also determine what exactly has impacted on a particular asset, should a collision occur. It’s most likely that sensors, whether these are brought in from another industry or developed specifically for this purpose, will be built into the blades of subsea turbines. This could have applications in a range of other offshore devices, not just in the tidal energy market.

“There is significant potential for us to export the skills and expertise we’ll be developing as part of this project – particularly as we move into the demonstration and commercialisation phases. Likewise, researchers will have access to new and hitherto untapped data, giving them the opportunity to accelerate the industry. The potential is there for our academic and business communities to take further leaps forward in the tidal energy market – our aim is to make this happen and create economic value out of the research for Scotland.”