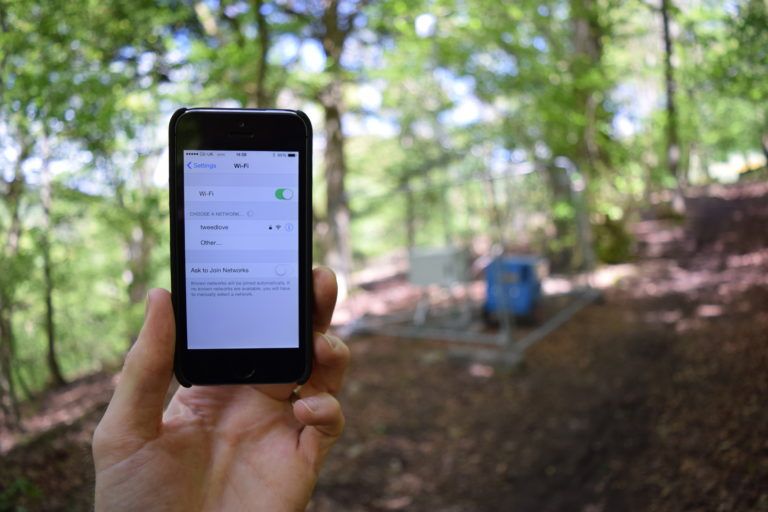 One of Scotland’s major mountain bike events scored a first in summer 2015 when it got a major digital boost that promises to transform the competitor and spectator experience.

Scottish Enterprise partnered with the Mountain Bike Centre of Scotland, Microsoft and other partners including CENSIS to equip Glentress Forest with cutting edge ‘TV white space’ technology. The trial will allow live coverage of the gruelling international Enduro event at the Tweedlove Bike Festival, which attracts 600 riders from around the world.

Moira Forsyth a Project Manager within the Innovation Directorate of Scottish Enterprise said: “TV White Space technology has the potential to provide a major boost for Scottish tourism.”

“Like many rural tourism businesses the majority of mountain biking locations have no or very poor connectivity – whether mobile or internet access. This lack of connectivity to stream live events also significantly limits the international viewing opportunities when Scotland hosts global events such as the Enduro World Series (EWS), which bring significant income into rural locations.”

“This is just one of many technological advancements spawned at the Mountain Bike Centre of Scotland. Since it opened a year ago we’ve welcomed the first clothing range for female mountain bikers from Findra, a Pro-Tow patented device which converts button ski lifts to mountain bike uplifts, an app which shows 3-D models of some of our most popular trails, and a multi-purpose oil and cleaner in one which is taking the market by storm. We’re also supporting many products which are still at the development stage and are encouraging a global outlook in these businesses by taking a stand at Eurobike, Europe’s largest trade show.”

Danny Cowe, Business Development Manager for The Mountain Bike Centre of Scotland, added: “Scotland is currently seen as a global superstar for mountain biking and the Centre for Scotland is an incubator of bike brands. We give these businesses the platform they require to test their products as well as the exposure required to get them off the ground. And it’s through the adoption of new technologies such as TV white space we can revolutionise the growing mountain biking market.

“We’re acutely aware that the visitor experience can be negatively impacted by poor connectivity – shutting down their ability to share their experience on social platforms. Beyond this they cannot use smart phones or other mobile devices in order to view or look and book with local businesses – for example local restaurants. We can see how this clever new technology could hugely improve both the spectator experience and improve their time at centres such as Glentress.”

Jim Beveridge, Senior Director, International Technology Policy, Microsoft said: “Microsoft is right at the forefront of TV white space technology because enabling high speed and low cost data in remote locations changes so many things not just in the UK, but around the world. We’ve successfully trialled it in everything from lifeboats to businesses and now in sport. It brings people together in a way that just wasn’t possible five years ago and it just might bring some of the superstars here this weekend direct to your mobile.”

Ian Reid, CENSIS CEO, said:  “We’ve worked closely and quickly with the entire consortium to get the project up and running – bringing innovative, indigenous SMEs together with a multinational, world class organisation like Microsoft. This is another instance where sensors are a key enabler for making Scotland and its businesses more competitive on the world stage.

“This project could deliver a significant boost to Glentress’s profile, while also developing infrastructure and services which local businesses can use to take advantage of the adventure sports market. If rolled out across other remote attractions, it could have a significant positive impact on Scottish tourism and the companies which rely on this trade.

“We’ve worked closely and quickly with the entire consortium to get the project up and running – bringing innovative, indigenous SMEs together with a multinational, world class organisation like Microsoft. This is another instance where sensors are a key enabler for making Scotland and its businesses more competitive on the world stage.”

Scott McEwan, Chief Executive, Boston Networks added: “We are delighted to lead the design, installation and commissioning of the TV White Space solution to support the EWS event, especially given the challenging terrain. Glentress is fairly remote and hilly, so designing and delivering a system that will enhance the visitor’s experience, and that could have a transformational effect on both the event and the local area, is an exciting opportunity for us.”